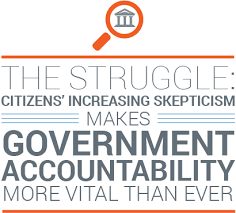 The right to know how tax dollars are spent

It also stated that,

“Arizona school districts spent about $3,500 less per pupil than the national average and allocated their resources differently, spending a lower percentage of resources on instruction and administration and a greater percentage on all other operational areas.”

Six key takeaways from an article about the report in the AZ Daily Star are:
1. Even with recent increases to teacher pay, Arizona’s teacher salaries remain over $11,000 below the national average. According to Lindsey Perry, the AZ Auditor General, part of the lower salary may be due to an AZ average teacher experience of 11 years compared to 13.7 for nation.
2. After adjusting for inflation, total per pupil spending is $177 less now than in 2004 and $861 below that of 2008.
3. Arizona spends $8,300 per student with 54% of that being in the classroom, compared with a national average of $11,800 and 60.9% in the classroom.
4. The lower amount Arizona spends in the classroom isn’t due to high administration costs which are only 10.4% of total dollars versus a national average of 11.2%. Rather it can be attributed in part, to higher energy costs due to extreme temperatures, more money spent on food services, higher transportation costs to serve rural and remote areas and higher class sizes.
6. Student support cost is high due to the large percentage of students living in poverty or those with special needs. 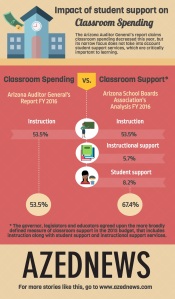 The Auditor General report goes on to state that,

“Although factors outside a district’s control—such as district size, type, and location—can affect its efficiency, some districts operate efficiently and have lower costs despite these factors, while others do not. What the report does not discuss, and is what has never been included, is how charter and private schools perform with the taxpayer dollars they receive.”

Yes, at least charter schools do get audited (not by the state, but an auditor of their choice), but it is a compliance audit, not one to determine efficiency of operations. And, it is the State Board for Charter Schools rather than the AZ Auditor General who is responsible for audit and compliance oversight, so the results of audits are not reported by the latter which makes it difficult to compare them with those of district schools. We do know however, that administration costs in charter schools have typically been double that of district schools. So much for charter schools being models of efficiency.

What we are in total darkness about, is the efficiency of private and parochial school tax dollar spending (via corporate and individual tax credits and vouchers) which in 2017 was about $200M and grows exponentially every year. Funny how those who rail about inefficiencies at public district schools, seem to never be as concerned about tax dollars spent by alternative options. Fortunately, this tide has been turning lately, given all the charter school scandals in the news. As for what’s going on in private schools, that’s anyone’s guess.

Here’s the bottom line. WHEREVER public tax dollars are spent, the public has a right to know the efficiency and effectiveness of that spending. If educational entities accept our money, they should be forced to accept our oversight. It is that simple.