Back in August of 2016 I blogged about Planetary change: What we are doing to the oceans.

Direct experience drives human perception and cognition. We react to what we see and hear. What we think about the world is shaped by those aspects of our planet that can be observed. We note volcanic eruptions and earthquakes. We see and hear and are touched by more and more violent weather. We indirectly experience, via the media, the loss of wildlife to gruesome acts of poaching for profit. Some of us even experience the rising seas. But we do not normally experience or think about what lies beneath the planetary surface.

Most people don’t have any direct contact with what lies beneath the surface of our oceans even though oceans take up 71% of the earth’s surface. A few people, though, oceanographers and sport divers, are sounding alarms about what we are doing to our oceans. …

As a sport diver, I had occasion to experience directly “what we are doing to our oceans.”

… For 35 years my wife and I took our vacations in parts of the world renowned for the quality of their SCUBA diving. We rarely repeated visits, but the island of Little Cayman (in the Cayman Islands) was an exception. We first dove the Little Cayman walls and reefs in 1987 and repeated the diving there in 2001 and then again over the Christmas/New Year holidays in 2006. In 1987 coral reefs were majestic: huge mushroom corals and gigantic sponges were abundant. We noted some damage in 2001, but the visit in 2006 was depressing. We witnessed a lot of destruction and coral “bleaching”. I would be more cautious of our anecdotes were it not for confirmatory observations from another group who we met in 2006 and who had been diving that island every New Years for 25 years. They all were sickened by what they had been observing over the years – “in tears.”

We concluded “As the oceans warm and chemically change due to CO2 absorption, the coral reefs are under serious threat. We don’t see that damage but it is there – beneath the surface, out of sight, and all too often out of mind. We are killing the water planet.” 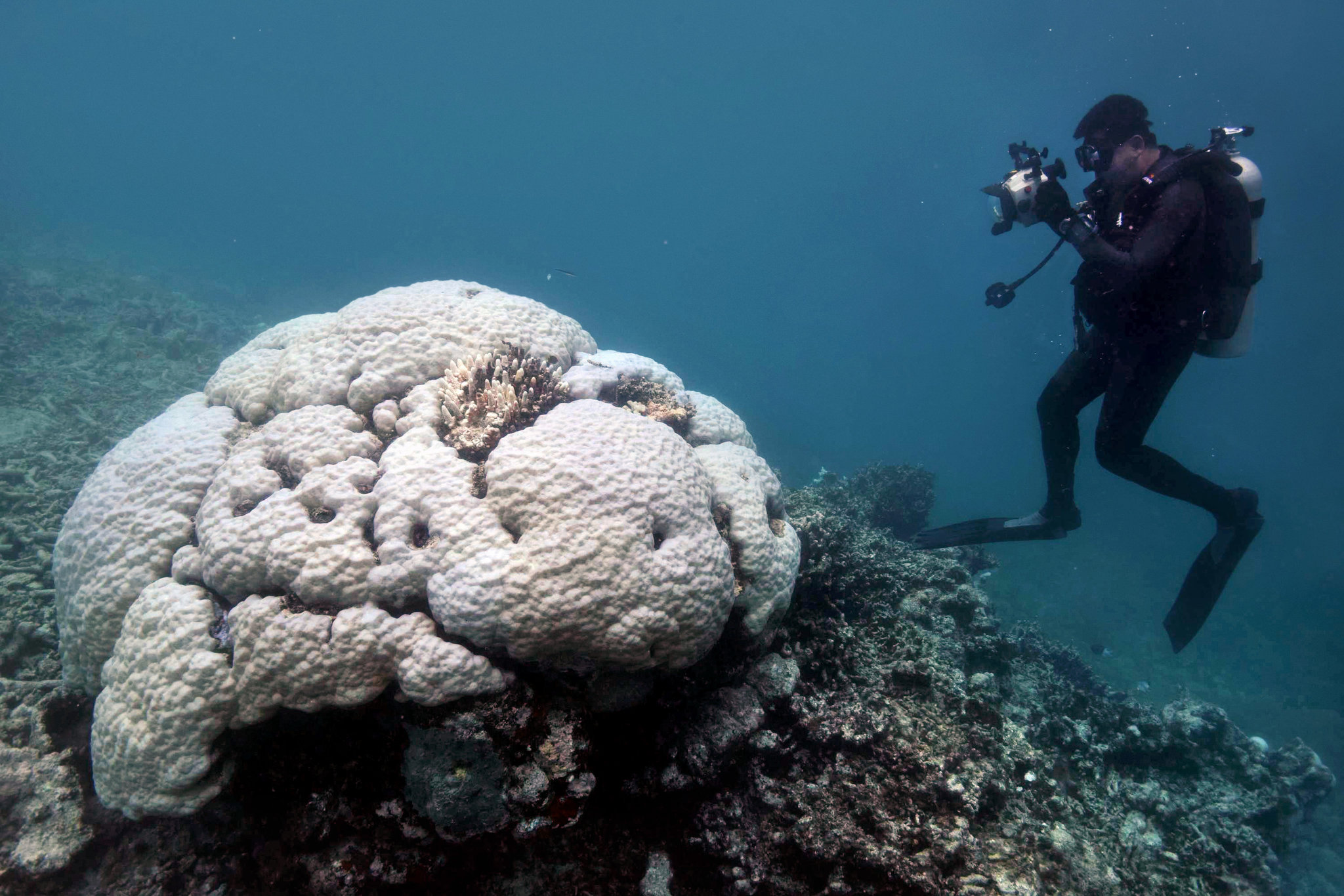 SYDNEY, Australia — The Great Barrier Reef in Australia has long been one of the world’s most magnificent natural wonders, so enormous it can be seen from space, so beautiful it can move visitors to tears.

But the reef, and the profusion of sea creatures living near it, are in profound trouble.

Huge sections of the Great Barrier Reef, stretching across hundreds of miles of its most pristine northern sector, were recently found to be dead, killed last year by overheated seawater. More southerly sections around the middle of the reef that barely escaped then are bleaching now, a potential precursor to another die-off that could rob some of the reef’s most visited areas of color and life.

The damage to the Great Barrier Reef, one of the world’s largest living structures, is part of a global calamity that has been unfolding intermittently for nearly two decades and seems to be intensifying. In the paper, dozens of scientists described the recent disaster as the third worldwide mass bleaching of coral reefs since 1998, but by far the most widespread and damaging.

The state of coral reefs is a telling sign of the health of the seas. Their distress and death are yet another marker of the ravages of global climate change.

Kim M. Cobb, a climate scientist at the Georgia Institute of Technology who was not involved in the writing of the new paper, described it and the more recent findings as accurate, and depressing. She said she saw extensive coral devastation last year off Kiritimati Island, part of the Republic of Kiribati several thousand miles from Australia and a place she visits regularly in her research.

With the international effort to fight climate change at risk of losing momentum, “ocean temperatures continue to march upward,” Dr. Cobb said. “The idea that we’re going to have 20 or 30 years before we reach the next bleaching and mortality event for the corals is basically a fantasy.”

If most of the world’s coral reefs die, as scientists fear is increasingly likely, some of the richest and most colorful life in the ocean could be lost, along with huge sums from reef tourism. …

Australia relies on the Great Barrier Reef for about 70,000 jobs and billions of dollars annually in tourism revenue, and it is not yet clear how that economy will be affected by the reef’s deterioration. …

… In poorer countries, lives are at stake: Hundreds of millions of people get their protein primarily from reef fish, and the loss of that food supply could become a humanitarian crisis.

Conservatism is not conservationism

And what are we humans doing about damage we bring to our oceans? The answers range from nothing to making the problem worse.

With the election of Donald J. Trump as the American president, a recent global deal to tackle the problem, known as the Paris Agreement, seems to be in peril. Australia’s conservative government also continues to support fossil fuel development, including what many scientists and conservationists see as the reef’s most immediate threat — a proposed coal mine, expected to be among the world’s largest, to be built inland from the reef by the Adani Group, a conglomerate based in India.

Trump announced his budget and in it a 31% cut to EPA as the Times also reported yesterday: Donald Trump Budget Slashes Funds for E.P.A. and State Department