If it sounds too good to be true…

Okay, so maybe Governor Ducey and the Legislature really are trying to solve the problem. You know, the one they, and those before them, created by pushing tax cuts, corporate welfare, and school privatization. But, it is REALLY hard to have the faith, when they throw out words like “advance-appropriated.” As in, “we can’t give you all 20 percent right now teachers, so we are going to advance-appropriate it in the next two budgets.”

I googled “advance-appropriate” and got nothing on the first page of search results. On the second page, there was a report from the New America Foundation titled, “Advance Appropriations: A Needless and Confusing Education Budget Technique.”

The New America Foundation appears to be fairly non-partisan with a vision that includes, “Equitable, accessible high-quality education and training over a lifetime”, “A society that promotes economic opportunity for all”, and “Equal representation in politics and participation in accountable governance.” Its Board of Directors includes New York Times Op-Ed Columnist David Brooks, ASU President Michael Crow, and many others from business, higher-education, and journalism.

Their report on advance appropriations referenced above, discusses the practice of this funding mechanism in Congress, and calls such a, “rarely understood budgeting approach that shifts funding into the fiscal year following the year covered by the appropriations process.”

In the report’s summary on the first page, it states that,

Advance appropriations add complexity to the education funding process and are of no practical benefit to recipients…Congress should end advance appropriations for education programs by providing a one-time funding shift that moves advances back a fiscal year so that they align with the current funding cycle. A new scoring rule to prevent future advances should also be enacted. The combined effect will reduce complexity and increase transparency in the federal education budget process. Such a change does not increase or decrease education funding. But it does promote transparency, simplicity and clear decision-making in federal education budget matters.

Fast forward to yesterday and Arizona Capitol Reports writing that,

The budget appears to fix what has been a source of contention among teachers who worried that the raises promised in future years would never materialize. To ensure that teacher pay raises in future years get funded, the raise money will be advance-appropriated. The budget advance appropriates the five-percent raises in FY20 and FY21, an allocation that could only be reversed if a future Legislature votes to take the raises out of the budget. The $371 million that Ducey promised in district additional assistance is also advance-appropriated in the proposed budget.

Call me cynical, but what’s the difference between “advance-appropriated” and “a promise”. The statement above, that “an allocation that could only be reversed if a future Legislature votes to take the raises out of the budget” doesn’t provide me much peace of mind. After all, our Legislature routinely approves budgets at the last-minute, in the dead of night, to provide the least amount of transparency possible. And, even when we have laws that provide dedicated funding to education, they have managed to refuse to pay in accordance with the law – Prop. 301 inflation funding (that resulted in Prop. 123) ring a bell?

This latest workaround to the REAL solution – finding or creating new, dedicated, sustainable funding for K–12 education, isn’t the only such shell game obfuscating the truth. You may have heard that even with the state trust lands money Prop. 123 delivered, our districts are still funded at almost one billion less per year than in 2008. What you may not have heard, is that for the past decade, the state has rolled over each year’s final K–12 payment of $930 million to the next fiscal year. The Grand Canyon Institute (GCI) reported in its January 2018 report titled: “The State of the State Budget 2018: The Revenue Systems is Broken” that,

The lack of revenue resources means the state will likely enter the next recession with this rollover still on the books.” The report goes on to say, “With dollars extremely tight, the state has been unable to allocate funds to eliminate rollovers, so continues the $930 million K–12 rollover whereby the last payment of the past fiscal year is rolled over into the next one. This rollover represents 9.5 percent of the General Fund expenditures, more than three times as large as the use of rollovers in FY2008…The rollover is twice as large as the budget stabilization fund of $460 million – and consequently hides a significant ongoing deficit.” When the General Fund per capita real dollars (the state now has only $3 for every $4 it had in 2007), and the rollovers as a % of the General Fund are combined, Arizona is not running a balanced budget, but a deficit of “$5 billion ($1 billion in rollovers and $4 billion in lost revenue not recovered since FY2007 – half of the General Fund).

These funding schemes may work in good times, but what happens when the inevitable downturn arrives and the bills come due? Don’t think we want to take out a second mortgage on the Capitol buildings sold and leased back at a considerable cost to the state under Jan Brewer’s reign. It is way beyond time that our Governor and Legislature give up on the gimmicks and make the tough decisions to truly deliver for the people of Arizona. That is, oh by the way, what REAL LEADERS do. ASU economists have credited 90 percent of the state’s decline in revenue on tax reductions and analysis by GCI shows that the reliance on trickle-down as a viable economic policy has not produced the jobs promised. “Actual state employment growth” writes GCI, “has lagged below the ”natural growth“ estimated by the JLBC in 2011 [with the New Employment Tax Credit]…Arizona’s employment performance here is far less with about one-third of the actual employment growth actually translating into jobs being eligible for the tax credit.” 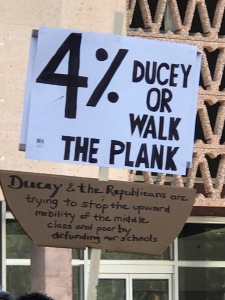 Unfortunately, Governor Ducey and this Legislature, seem blind to the truth and unwilling to do what needs to be done. Just think back if you will, to May 2017, when AZ education advocacy groups were fighting for 4 percent for the teachers and were told 1 percent was all the state could afford. How can we now, without ANY new revenue, afford 20 percent? Reminds me of that old saying, “if it sounds too good to be true…”