More than half of all U.S. public school students are enrolled in racially concentrated school districts” which the EdBuild report defines as more than 75% white or nonwhite students. In addition, about 20% of students are enrolled in districts that are both poor and nonwhite, but just 5% of students live in white districts that are equally financially challenged. These conditions help create an average disparity in the U.S. of about 19% or $2,600 less per student in poor nonwhite school districts than those in affluent white ones.

At least Arizona is one of the 35 states that “actively works to redistribute education money to make up for the fact that wealthier school districts generate more local funding than poor school districts.” It is called “equalization funding”, and provides school districts a base funding of $3,960 for every student enrolled (2018–19). With the school funding system reliant on local taxes however, EdBuild says smaller districts can have the effect of concentrating resources for a small, privileged few. And not only do wealthier districts have higher property values to better support the district, they may enjoy more active PTAs and well-funded school foundations to provide additional assistance. These conditions have resulted in Arizona having the biggest funding gap between districts where predominantly nonwhite districts received an average of $7,613 less per student. 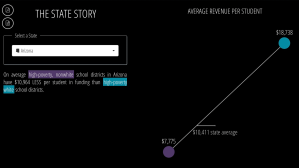 According to EdBuild, “Because schools rely heavily on local taxes, drawing borders around small, wealthy communities benefits the few at the detriment of the many. White districts enroll just over 1,500 students – half the size of the national average, and nonwhite districts serve over 10,000 students – three times more than that average.” This problem is exacerbated in Arizona where many of the mostly white districts are small and rural and the nonwhite districts tend to be larger, in urban areas. “The comparison groups are like oranges and apples,” contends ASU Teachers College assistant professor Margarita Pivoarova. “We can’t really compare, not in terms of size, not in terms of location.” Other Arizona officials admit there is a disparity, but say EdBuild should have factored in more of the state’s students, such as charters with just a dozen students. Anabel Aportela, the director of research for the Arizona School Boards Association said, “There’s so many things to question about the data [like the small school weight formula], you can easily dismiss the message.”

I know Anabel and if she says there’s more to the story, there is. But, we must be open to the truth that our current school funding formula, which has been in place for 35 years — before charters, school tax credits, and vouchers were part of the landscape — needs to be relooked.

“”So long as we link opportunity to gerrymandered borders and school funding to local wealth, we will never have a fair education system,“ Sibilia says. ”The wrenching reality is that“, says Rebecca Sibilia, CEO of EdBuild, ”from any angle, America is investing billions more in the future of white children.” And that should not be, of course, acceptable to anyone.